Shubhama Singh, Tanmay Chavan, and Rohith Viswanath participated in Rajneeti, a political case study competition from the Indian Institute of Technology (IIT) Kanpur, which was held during 2-6 February 2022.

Honey Agarwal participated in the Hack-and-Learn (Spring 2022) event organized by the Government Outcomes Lab at the Blavatnik School of Government, University of Oxford. Honey Agarwal’s presentation during the event was based on data sets analyzing the Foreign Philanthropy in India.

Neha Singh’s article "Sundarbans and Climate Change: Assessing the nexus between climate change and human trafficking" was chosen for whitepaper presentation in the Policy Symposium'22 by Bengal Development Collective.

Shubhama Singh and GD Niveditha participated in the Urban Geospatial Data Stories Challenge 2022 organized by the National Institute of Urban Affairs, where they presented the analysis of the health care centers on the basis of the distance traveled within each ward in the city of Vadodara

Prarthana Vaidya and Srija Gadamsetti participated in the Policy Case Competition - Amlan, hosted by IIM Lucknow as a part of their festival Manfest-Varchasva held on 20 February 2022. The team was one among the nine national finalist teams.

Honey Agarwal, Shubham Prakash, and Shubhama Singh participated in the St. Joseph's College of Law (SJCL) Climate Action Policy Hackathon 2022 in which they prepared a policy brief for the sustainable recommendations for climate change action for a city similar to Bengaluru. The team stood at fourth position in the competition.

Satyamitran Guruhari was the Assistant Director in the theatre production of Mahesh Dattani's 'Dance Like a Man', a play on the burdens of expectations and manhood. The play was delivered in the full house at Rangashankara Auditorium on 21 December 2021.

Kashish Komal was chosen as a delegate to attend ASEAN Youth Conference held in October 2021.

Aditi Mishra was awarded a scholarship by Global Environment Facility and United Nations Population Fund (UNFPA) to attend the conference on 'Evaluation in an Uncertain World: Complexity, Legitimacy and Ethics' organised by the European Evaluation Society (EES) in September, 2021.

Dishna Sikidar co-authored (along with Roshan Saha of Observer Research Foundation) a paper titled “Is agri-trade sustainable?” published in the Journal ARTHA (2021).

Rohith Vishwanath co-authored a paper (with Soumya Raman) on "Election Laws: Understanding the web of political corruption in the age of Neoliberalism" Legal Lock Journal Vol. 1 Issue No. 2.

Bala Panchanathan’s paper 'Cash is King: Policy Reforms in the Electoral Bonds Scheme' was adjudged to be one of the top six submissions for the competition (May 2021) 'CASPR OpEd: Policy Binge' organised by the thinktank Centre for Advanced Policy Research, Mumbai.

Bala Panchanathan presented her paper on 'The Urban Poor's Quest for Right to the City: An analysis of Plans, Policies and Litigation Around Forced Slum Evictions and Housing for the Urban Poor' during the '4th International Graduate Seminar on Quality of Living in Informal Settlements' organised by TISS Hyderabad's School of Public Policy and Governance during 19th April 2021 to 21st April 2021.

Abhishek Krishnamurthy was feastured among the top 10 finalists in the ATLAS-CPPR South-Asia Public Policy Challenge 2020.

Vidhi Narang was a panelist at the United Nations Students Association (UNSA), Barcelona conference on "The role of UN Women: Evolution and challenges for gender equality in the Covid-19 world" dated 8 March 2021.

Aishwarya Tiwari, Pramiti Lonkar and V. Abhishek formed a team to participate in Cicero Public Policy event of IIM Indore (19-21 February 2021). They were one of the finalist teams.

Devansh Shrivastava’s essay on the “Urbanising Asia and World Knowledge”, a competition organised by CEPT Ahmedabad (2020) was adjudged to be among top ten finalists.

B. Bhavana, Prerit Shukla and Chaitanya Bhat formed a team to participate in Cicero Public Policy event of IIM Indore (19-21 February 2021). They were one of the finalist teams.

Sehrish Hazarika was invited to the conference of Harvard Project for Asian and International Relations (HPAIR) 2021 as Indian delegation team.

Anurag Kumar Verma, Shivi Grover and Honey Agrawal formed a team to participate in Cicero Public Policy event of IIM Indore (19-21 February 2021). They were one of the finalist teams.

Anabil Mahanta, Ankitha Rao, Anun Sood, and Rohit Vishwanath participated in the Pandemic Policython organized by Harvard University during 23-25 October 2020. The event attended by over 1000 applicants, the team from MPP 7th batch worked on the theme of how domestic violence increased during pandemic in the track of Public Health.

Ravneet Kaur published a paper on "Legal framework for researching a post-covid social world" in the journal of Asian Law and Public Policy Review Vol. 5 pp. 108-113.

Chitra Rajpal published an article titled “Woes of small farmers in Punjab” in the journal of Niti-Samvad Vol. IV (published by the Public Policy Department of St. Xavier’s College).

Ankur Mishra (along with Saptak Ghosh of CSTEP) published an opinion piece in Economic Times titled “Sowing the seeds of a solar power revolution via agro photovoltaics” dated 6/June/2020.

Bethamehi Joy Syiem (MPP6) participated in the national level Wingword Poetry Prize Competition 2019. Her poem, 'Station', a candid poem that shines a light on inequality in India was chosen among the commendable mentions for the year.

Charan Preet Singh (MPP6) was member of the team of regional winner of NASPAA-Batten Student Simulation Competition 2020 on Sustainable Cities.

Swathi Krishnamurthy, (Masters’ Programme of Public Policy 2018-2020 batch) won the first place at a national level paper presentation competition held as part of policy summit, ‘Utthan’ at IIM, Bangalore in November 2019.  45 student teams took part in the competition with 5 teams being shortlisted for the final event. The theme of the event was ‘Bridging the gap – Innovative and Inclusive India’.

A team of Ms. Shivi Vijayvergiya and Mr. Nakul Narayanan (both belonging to MPP3) participated in the competition organized jointly by IIT Delhi and Ministry of Road Transport and Highway, Government of India. The competition titled iSafe involved identification of a black spot and to present a policy solutions to reduce accidents. MPP3 team from NLSIU was adjudged the 3rd best team in the competition.

A team of three MPP4 students - Aarushi Gupta, Ishita Jain, and Yogaraj Mudalgi participated in the policy simulation competition organised by Network of Schools of Public Policy, Affairs, and Administration (NASPAA) on February 24, 2018. The Competition was held at 16 sites across the globe. The theme for the competition was ‘Pandemic Crisis Management and Global Health Security.’ All three candidates from MPP4 reached the final round of the competition held at the American University in Cairo. The team comprising of Ishita Jain was declared as the regional winner.

Shivi Vijayavergiya was conferred "VSO LIfe Changing Award" by Voluntary Services Overseas, India for the volunteering she dud in Rajasthan. The event was held on 5th December 2017 on International Volunteering Day at New Delhi.

Manavi Das presented a co-authored paper at the XII International Conference on Public Policy and Management at IIM, Bangalore in 2017. The paper was titled ‘Engaging Local Resources to Achieve Secondary Education: Lessons from an Intervention in Western India’.

Mitra, A., & Ramaprasad, A. presented a paper on “Regulation of Medical Devices in India: An Ontological Analysis” during the 2nd International Conference on Advances in Healthcare Management Services, December 2016.

Apoorva S. and Mansi Sharma presented a paper on “The perception of Sedition among the youth and the deafening roar of “Aazadi” at Lloyd Law College, Greater Noida in a conference organized by Law Commission of India and Commonwealth Legal Education Association, Asia during 5-6 November 2016.

Kiran A. B., Anilkumar M, Chetan B. Singai presented a paper on “The Saga of Marginalisation of Tribal Communities in India: A Systemic and Systematic Policy Analysis” during the tnternational Conference on ‘Marginalisation, Poverty and Decentralisation’ at Kerala Institute of Local Administration, Thrissur, Kerala, India during 19-22 November 2016.

Kabir Arora presented a paper on 'Exploring Nayandhahalli as an ecosystem where waste is transformed into resource' in Switzerland as part of Trust and Integrity in the Global Economy conference in July 2016.

Shrikant Wad, Sharada S., Beni Chugh, and Vivek Raj Anand attended the Summer School in “The Philosophy, Politics and Economics” at IGIDR in May 2016.

Sharada S. published a paper on "Charting a path forward for Internet access in India" (with Mike Godwin at the R Street Institute).

Sharada S. was recipient of the global award for Amazon Euro-SSIG Fellowship 2015 for research and attendance at the Internet Governance forum at Brazil.

Poem titled "Wall Paper" by Deepa K. S. was selected out of 300 entries from 33 countries through International Writing Contest organised by the British Council. The poem is published in the anthology titled Inspired by my Museum in February 2015.

Mounik Shankar Lahiri presentated a paper on 'The Political Economy of India's Informal Labour Market at the Xth International Conference on Public Policy and Management at Indian Institute of Management, Bangalore on 3rd August, 2015.

Mr. Aniruth T. and Mr. Sasidhar S. won the most 'futuristic idea and innovation' prize for the idea pitched at the Microsoft international innovation camp during June 2015, held in Oslo as a part of the HiOA summerschool program.

Mr. Varun Panickar published a paper on “State-sponsored Alcoholism in Kerala” in the Economic and Political Weekly, Vol. 50(23) on June 6, 2015.

Rashmi Nayar presented a paper at the Tenth Annual International Conference on Public Policy and Management, Indian Institute of Management, Bangalore during August 3-5, 2015. Title: "Use of GIS in Healthcare to Assist Policy Makers: A study on Malaria incidence in India".

Manavi Das presented a co-authored paper at the XII International Conference on Public Policy and Management at IIM, Bangalore in 2017. The paper was titled ‘Engaging Local Resources to Achieve Secondary Education: Lessons from an Intervention in Western India’. 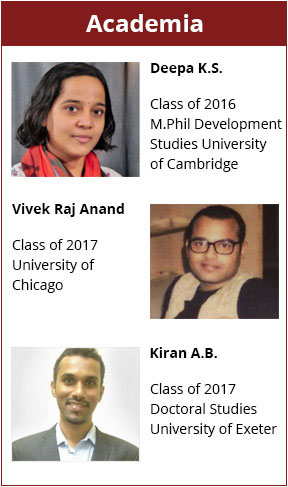 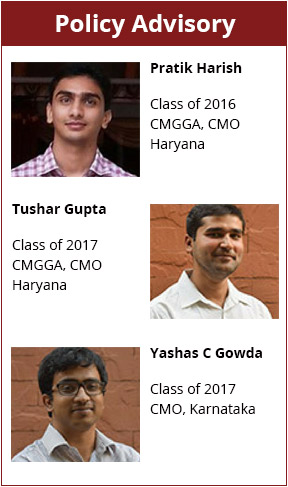 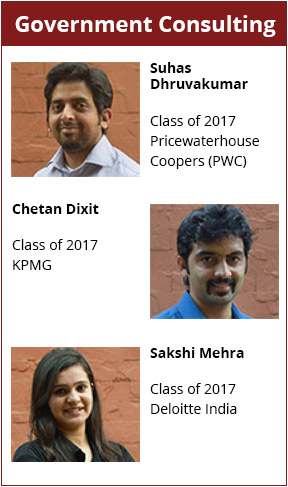 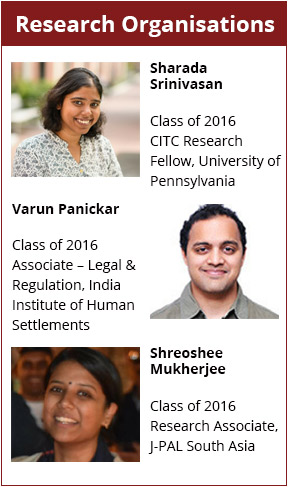