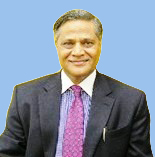 Anup K. Pujari, has been a Civil Servant and a teacher of Economics for more than 4 decades. He retired from the Indian Administrative Service (IAS) in 2016, his last position being Secretary to the Government of India heading the Ministry of MSME (Micro Small and Medium Enterprises). Prior to that he was Secretary in the Ministry of Mines. He briefly worked as Secretary, Ministry of Steel and as CMD of SAIL. In the Civil Services he had held various positions both with at Delhi with Government of India and at Bengaluru with the State Government of Karnataka; He has worked in in the fields of Finance, Commerce & Industry, Education, and in Agriculture. He had led the Indian team in the negotiations of Bilateral Investment Treaties (BIT) with various countries including with the US. He was also India’s Deputy with the World Bank, the IMF, the Asian Development Bank and the African Development Bank. As the DGFT (Director General of Foreign Trade) between 2010 & 2014, he was responsible for advising the Government on Trade Policy and implementing trade promotion measures.
He received his BA (Hons) from Sambalpur University; MA from Delhi School of Economics; MA in Political Economy & a PhD in Economics, both from Boston University. In addition he also has a bachelor’s degree in Law from Delhi University (enrolled as an Advocate with Bar Council of Delhi) and spent a year with the National Defense College on Security and Strategic Studies.
He had taught at Shri Ram College of Commerce (SRCC), University of Delhi, between 1976 and 1980; and subsequently at the Boston University, at UMASS and at Northeastern University between 1990 and 1992. Almost every summer since 1991 (except 2008-2015) he has been teaching Economics to the Mid-Career MPAs at the Summer Programme of JFK School of Government, Harvard University (known as HKS: Harvard Kennedy School). He has also taught at Harvard Institute of International Development (HIID) in their Budget programmes held at Cambridge, MA, USA; Nairobi, Kenya; and Amman, Jordan.