The revolution never came. Battles of workers’ rights were won but the war often lost across the world. This is what unites the Haymarket Affair of 1886 with the garment workers’ protest on Hosur Road in Bengaluru a fortnight back. From 1886 to 2016, the world has tried every conceivable arrangement of the economic system, yet workers have never seemed to have found a way out of the daily insecurities of their wages and livelihoods.

Today, as countries across the world celebrate International Labour Day, it presents an occasion to look back at labour welfare over the century. The paradox is that the concerns of the workers don’t appear to have changed from the Haymarket incident to India’s Hosur Road protests in Bengaluru. Some may be quick to point out that Haymarket was about an 8 hour work day and Bengaluru protest was workers protesting against an arbitrary and sudden change in Employees’ Provident Fund rules pertaining to withdrawal of funds by the workers.  However, at a broader level, the nature arguably remains the same – the arbitrariness exercised by employers in dealing with workers, work conditions, wages and matters which are related to their livelihood. The sense of insecurity among the workers remains high, as seen in the extremely short time that it took from the notification of changed rules to the demonstration that happened across the garment industries clusters in Bengaluru.

Lenin’s sense of confidence in his 1919 May Day speech and the international optimism with the formation of International Labour Organization (ILO) in the same year was remarkable.  The Russian daily Izvestia reported a part of Lenin’s speech two days later:

“Pointing to the children, Lenin said that they, who were taking part in the celebration of the festival of the emancipation of labour, would fully enjoy the fruits of the labours and sacrifices of the revolutionaries.

Our grandchildren will examine the documents and other relics of the epoch of the capitalist system with amazement. It will be difficult for them to picture to themselves how the trade in articles of primary necessity could remain in private hands, how factories could belong to individuals, how some men could exploit others, how it was possible for those who did not work to exist. Up to now the story of what our children would see in the future has sounded like a fairy-tale; but today, comrades, you clearly see that the edifice of socialist society, of which we have laid the foundations, is not a utopia. Our children will build this edifice with oven greater zeal.” (Stormy applause)

The world moved on quickly from that moment in history. The capitalist system contrary to Lenin’s dream is not a relic but the order of the day. Factories have increasingly gone on to belong to individuals. Free market economics soon took over pounding the socialist dream to fine dust.

Back home, India of 2016 too has ventured far away from the socialist dream of some of its leaders. Prime Minister Narendra Modi prefers to mark this day in 140 characters on twitter with this message –

“On Labour Day we salute the hard work, determination & dedication of millions of Shramiks who have an invaluable role in the making of India” (sic)

The point of this post is to illustrate that the developments related to workers’ rights and welfare should be a cause of concern to policy makers. The workers continue to contribute to the making of India but they certainly need more attention and care than what can be expressed in 140 characters.

The first chart (Chart 1) indicates a quiet and unseen quelling of workers’ right to collective action. In a nine-year period from 2000 to 2009 the number of registered trade unions has halved. Labour movements thrive on collective action. It is not a hard guess to figure the bargaining power that the workers might be left with in the wake of a declining number of registered unions across the country. 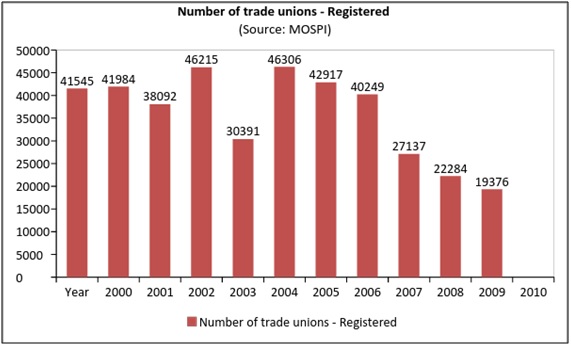 The next major trend was affirmed formally by the National Commission for Enterprises in the Unorganised Sector under Arjun Sengupta’s lead (the Commission’s report was long withheld by GoI for reasons best known to the corridors of Vyapar Bhavan). The report as indicated –

“…is focused on the informal or the unorganised economy which accounts for an overwhelming proportion of the poor and vulnerable population in an otherwise shining India. It concentrates on a detailed analysis of the conditions of work and lives of the unorganised workers consisting of about 92 percent of the total workforce of about 457 million (as of 2004-05). For most of them, conditions of work are utterly deplorable and livelihood options extremely few. Such a sordid picture coexists uneasily with a shining India that has successfully confronted the challenge of globalisation powered by increasing economic competition both within the country and across the world…”

Further, it found that –

Understandably, this was a damning report to come out in 2007 and most certainly was kept away from public attention. Chart 2 compares the formal and informal sector employment in organised and unorganised sectors. 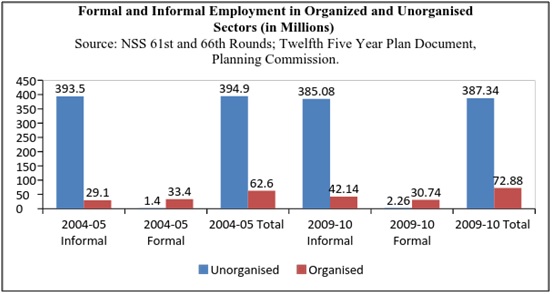 Finally, let us examine the central spending on social security across various categories of expenditure of GoI. This is to illustrate the state of neglect and dereliction of the state from its professed commitment to workers’ welfare. 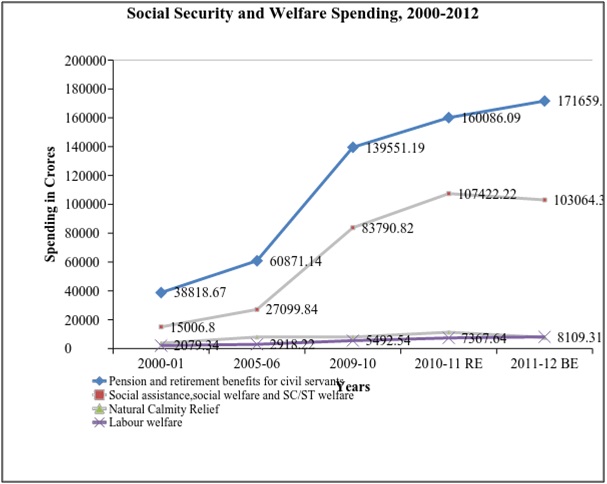 Labour welfare as observed from the chart, forms least of the priority compared to pension and retirement benefits for civil servants. The priorities of GoI, if not stated, can sure be observed from these patterns of spending. In the Indian government’s imagination it isn’t the workers but civil servants who have an invaluable role in the making of India. Perhaps!

For all the optimistic, enthusiasm laden lectures that labour rights lawyers and professors make in the country’s many universities, the real picture isn’t a happy one. Neither is it a narrative of winning the rights cause. If any, it is a losing battle and thinkers, professors and lawyers must necessarily move beyond the glory song of rights won. The direction to move in is to think of how must the workers be armed (not in the weapons sense) to take on this shove from the current economic system which appears to be shortchanging them left, right and center.

(Sachin Tiwari is a graduate student of Master of Public Policy in the National Law School of India University. He can be reached at sachin.t@nls.ac.in)

Report of the Committee on Unorganised Sector Statistics (https://ruralindiaonline.org/resources/report-on-conditions-of-work-and-promotion-of-livelihoods-in-the-unorganised-sector/)